>Not sure if this is legit or photoshop, but supposedly this billboard appears on Interstate 10 north of Tucson: 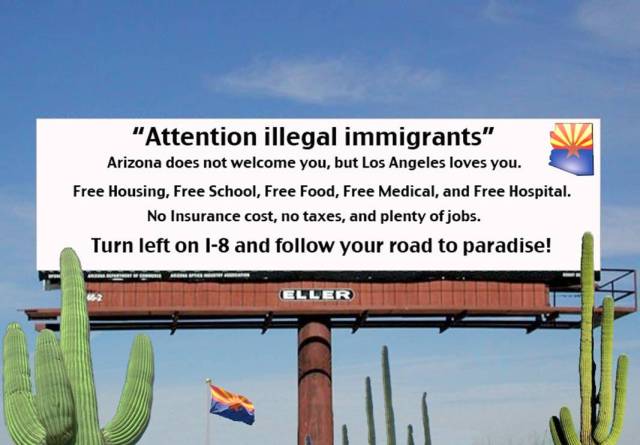 >This is from Chuck Colson’s organization, “Breakpoint” and needs to be read…Frankly, there are many “chaplains” in the military (and in prison work) to whom this will not be a problem; but thankfully there are a host of conservative, Biblical-minded chaplains also:


June 2, 2010
Many people still remember the story of the four U.S. Army chaplains who served on a troop ship during World War II. When the Dorchester was torpedoed, the four chaplains gave up their lifejackets, linked arms, and went down with the ship, praying and singing hymns.

We remember these army chaplains for their bravery and sacrifice. But unless something is done, today’s military chaplains may have a different legacy: being smeared as bigots, and drummed out of military service.
Last month, over 30 retired Army, Navy, and Air Force chaplains sent a letter to President Obama, Defense Secretary Robert Gates, and other political leaders.

With bills pending in Congress to repeal the “Don’t Ask, Don’t Tell” policy, the chaplains write: “We are deeply concerned that these changes would threaten the religious liberty of chaplains and Service members. Put simply, if the government normalizes homosexual behavior in the armed forces, many (if not most) chaplains will confront a profoundly difficult moral choice: whether they are to obey God or to obey men.”

Forcing chaplains to make this choice will have two consequences—both undesirable: First, knowing they risk discipline and damaging their careers if they don’t embrace the normalization of homosexuality, chaplains will feel pressured to water down or even abandon key elements of their denomination’s faith and practice.

Second, as the former chaplains wrote, “chaplains might have their ability to freely share their religious beliefs challenged and torn away” in everyday situations.

For example, chaplains administer a marriage support program called Strong Bonds, helping couples endure the stresses of military life.Should homosexual conductbe normalized, same-sex couples may sign up for Strong Bonds. But, as the letter states clearly, the beliefs of many chaplains “would not allow them to support relationships that are both harmful and sinful.”
So the chaplains will either deny their religious beliefs or face “the potentially career-ending consequences of a discrimination complaint when they deny the request.”

Now, I was moved when I read the chaplains’ letter. They cite the following words of the Manhattan Declaration: “Because we honor justice and the common good, we will not…bend to any rule purporting to force us to bless immoral sexual partnerships, treat them as marriages or the equivalent, or refrain from proclaiming the truth, as we know it…

I urge you to add stand with our nation’s military chaplains. First of all, go to ManhattanDeclaration.org and sign the Manhattan Declaration. If you’ve already done so, get all your friends to do so, get your family to sign, circulate it to all your friends on your email list. We are making a major push to get one million signatures.

Second, contact President Obama and your members of congress and ask them to support the current policy regarding homosexuality.

It would be a tragic irony if those who risk their lives protecting our freedoms should be forced to sacrifice their own.